Jillian here. Sorry I missed last month. Things were getting me down and I lost all my oomph and get up and go. I’m better now and hopeful again for better things ahead.

I just got back from a socially distanced conference which was nice as I got to see people I haven’t seen in a year and got in some good, masked visits. The advantage to this conference over the old days was it was limited to 400 people instead of the usual around 1,000. AND instead of tables of 8-10 at the meals, there were only tables of 4 so there was all kinds of room to spread out. There is usually quite the squeeze in happening.

My friend is the conference chair and for the second time, she upgraded my room to a suite which was sweet! I paid the same price as if it was a regular room. Last year, my suite even had a dining table for 8. This year, I “Only” got a sectional sofa- but I did get a full foyer. 🙂 I felt pretty spoiled.

AND the piece de resistance? I got to see my son and his family before I headed home as well as have dinner with them the night before the conference started. So, a good four days then. Here are some pictures of my Sweet Baboo. The frog was his Valentine’s Day gift from me. He’s a happy, sassy little dude and makes me laugh with his awesome personality.

Jillian here.. I was in a dilemma about what to post this month. While I don’t want to ignore what’s happening here in the USA, I don’t want to make this post a political one. Suffice it to say, I am sad and disappointed about the way things have been going here. I am also sad about how my UK friends have gone back into lockdown. It’s just a weird time to be alive. Praying for us all world-wide.

I thought I’d share a couple of photos from Christmas. I don’t like pics of myself so I’m posing my sister, my mom, my dad, and my son. All with the grandson. I am also posting pics of my December 28th big day. 🙂 Some of the photos are taken at my parents’ house on Christmas and some at my house where we celebrated my big one! The one with Benjamin and his dad (my son) was taken at the park.

Hope everyone has a blessed January. Stay warm. It’s supposed to be in the 20s here tonight- that’s minus 4 for you in Celsius land. 🙂 BRRR!

Late is Becoming the New Normal For Me

I’m late again. It seems the 9th has a way of arriving when I’m in the midst of chaos or travel. This time, I was in Orlando for work from Wednesday to Friday and then spent the weekend with my son and daughter-in-law. I got home last night a little after six but it’s an almost 7 hour drive and even though I knew it was my day, I was too lazy to type. Alas.

So, here I am today. I usually take the grand dog, Primm, a toy when I visit. This time I got her a weird yellow creature (picture below). She wasn’t thrilled with it when I got there Wednesday night, but by Friday, she’d warmed up to it. Saturday, she was pulling the stuffing out of it. My son said, “And this is why we don’t buy her soft toys.”

I told him it cost less than lunch at Wendy’s and if she destroyed it, it lasted longer than digesting a meal. I also picked up the fuzz that came out of it. 😁

It seems I’m already a bad influence on the grand dog. And since my daughter-in-law is 17 weeks pregnant, I’m sure I’ll be in trouble some more as the future unfolds. 😁

We’re super excited to have our first grand baby. I was happy to be able to go with my son and his wife to shop for some baby items and some maternity clothes for her. She has just a little bump right now, but she tried on the fake one at the store to see how the dresses would fit later. She was precious as she giggled every time she looked at herself in it.  Lots of fun ahead for them— and us. 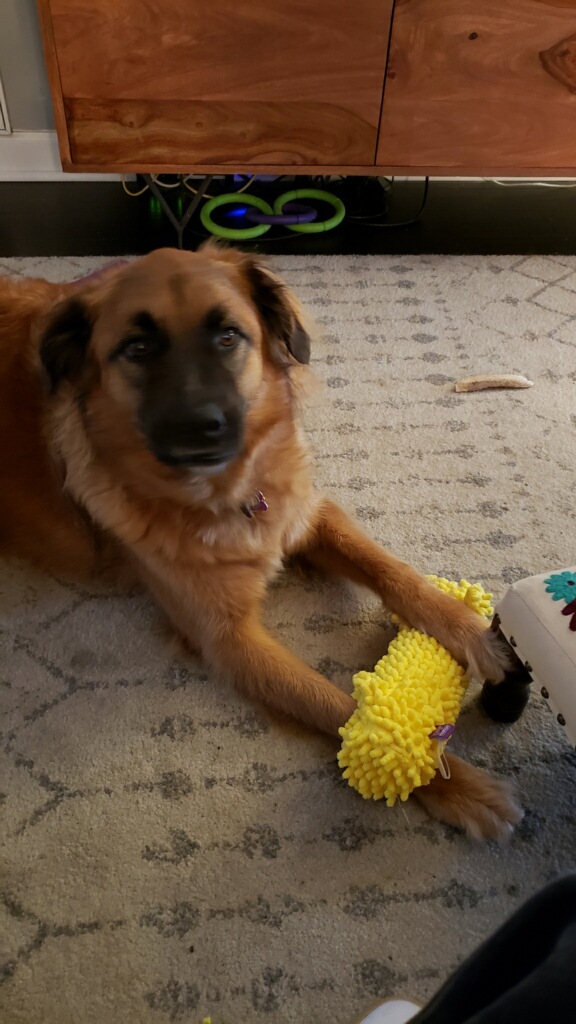 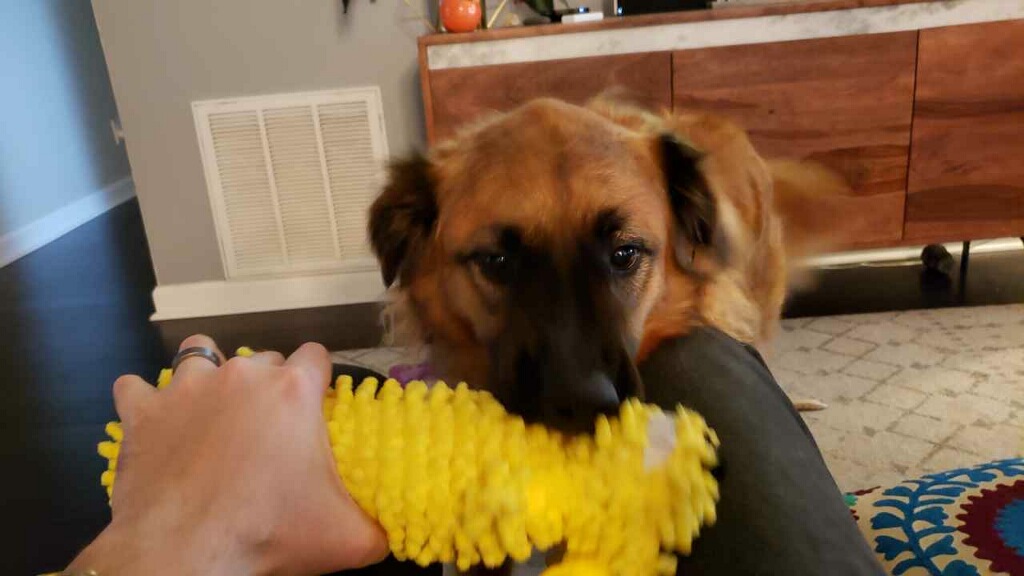 Jillian here. I was working on an upcoming blog post for a friend for the month of October which is apparently Family History Month. My post for then is about my two great aunts. One of which I knew well and one who died before I was born. It reminded me of a funny event involving the one I knew and I thought I’d share it for my post here this month.

My family is from North Alabama. Even though I never lived there, we visited a lot.

My great aunt Lit was my paternal grandfather’s sister. She was married to a man named Charlie Sandlin and I loved, loved him- her, too, but her husband was my pal as a kid. My grandparents owned a house on the Tennessee River and Uncle Charlie and I would swim the mile and a half across it all the time- we’d try to touch bottom way out in the middle. Sometimes we could and lots of times, we couldn’t. The Wilson Dam was not too far away and the water levels rose and fell as the dam was used to let boats in and out of the lock.  It was always deep in the center, but sometimes, near shore, you could walk out a number of feet and pick up stray clams in the mud. All the kids grabbed them a lot and then we’d put them in steaming water to see them open. Charlie was a big ole kid and we had a special bond.

Uncle Charlie had a brother named Buddy and he was an inventor. It was a lot of fun to see him on occasion- usually running into him at a store or something like that. He didn’t come out to the lake house and I didn’t know him well and never met any of his kids or grandkids.

Years later, after Uncle Charlie died, I was in law school in Birmingham, Alabama and met a guy in one of my classes named Jimmy Sandlin. I couldn’t resist asking him if he was from Florence, Ala. He said he was and I told him I had a great aunt named Lit who married a man named Charlie Sandlin and he had a brother named Buddy. I asked if he knew them.

He said he was Buddy’s grandson but I was wrong about his Uncle Charlie because his uncle was married to a woman named Marie. It was just so weird, I couldn’t believe it. I said, “I promise you, her name is Lit and it has to be the same person- how could it not be?”

Shrugging, he said, “What can I tell you? Uncle Charlie’s wife was named Marie. I swear.”

I went home and called my dad to find out exactly what Uncle Charlie had been up to with two wives. My dad laughed and laughed and when he finally got hold of himself, he said, “Her name is Lydia Marie and the family have always called her Lit.”

Man! Did I feel silly, but you know what? In all my life, I’d never heard her called anything but Lit.

The next day, I told my new friend we did indeed share a great aunt and, from then on, we called ourselves cousins-in-law.

How about you? Any stories about mistaken identity?

Here’s a picture of the two great aunts I’ll be on my friend’s blog talking about in October. Lit is the one in the seat and Hoovey (another one with a nickname as her real name was Louise) is the one on the arm of the chair.