Are you are sitting comfortably, as I’d like to tell you a story. A true one.

Once upon a time there existed a village called Charlton nestled on the edge of the county of Gloucestershire, England. Surrounded by farmland, there were some large houses, a pub, post office, and several small cottages clustered around a village pond. Through modern eyes, it might seem idyllic but life then was simple, but harsh especially in winter as cottages were small, two-bedroomed buildings with no hot running water. Each had a kitchen and a small living room but there was no bathroom and the toilet was outside at the end of the garden.

Charlton was close to what was then the largest factory in Europe (later to become part of Rolls Royce) which designed and built aircraft, including engines and spare parts. Due to its manufacturing importance and its runway, it was a prime target during WW2. Thankfully the village survived the bombings, however, after the war, a compulsory purchase order was issued by the air ministry who wanted to extend the runway to accommodate take-off and landing requirements of a new aircraft, the Bristol Brabazon, and to build what would be the largest hanger in the world to house this experimental plane. The village was demolished, the government rehousing all the residents in brand-new houses in a larger town close by, thus keeping most of the community together.

In 1947, Vera and Albert and their two sons became the first family from Charlton to move into the new semi-detached homes, the national press on hand to record the event. With three bedrooms, a kitchen with storage cupboards plus larder, an anthracite boiler in the corner for hot water, a dining room, a living room with a large open fireplace, and joy-of-joys an indoor toilet, and an even bigger joy, a bathroom with a sink and airing cupboard with an immersion heater, Vera felt like she had won the football pools. Outside was a shed with a coal store and another toilet attached to the house, all surrounded by a large garden in which to grow vegetables and flowers. Some nine months later another son was born – a celebration of the new house Vera would proudly boast.

Reader, 30 years later I married that new son, and a month after, moved into that house to look after my terminally ill mother-in-law. It is where we still live. Whilst for Vera the house was wonderful, for me it was not. The kitchen was cluttered, small, had only one electric socket sited under the wooden draining board by the sink. The boiler created constant battles with soot and ash, as did the fire in the living room. There was only one electric socket in each room, nor was there any central heating. I truly hated the house but put up with it all.

Over time and the years we have altered and changed the house to the extent Vera would never recognise it or the gardens, and slowly I have come to like it. We are happy here. And we’re still improving and changing things. Whilst the majority of it is now as we want, the kitchen is desperately in need of updating again, but a chance situation last week changed that, putting its refurbishment on the back burner once more. Instead, we had a new drive laid. The old concrete one we installed some 30 years back was cracked in several places and breaking up and was always frankly too narrow. Laid within a day and a half, we are delighted with the result. Dave still parks right on the edge, still steps onto the grass to get out of the car, but he’ll learn soon enough. And I’m in no hurry for the new kitchen. It’ll come in time. 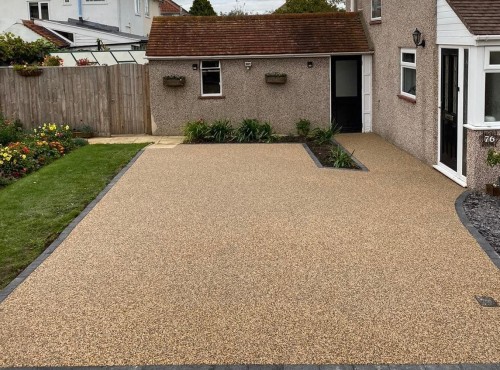 I hope you’ve enjoyed my story and trust I haven’t bored you with it. Oh, and the photograph of Moving Day? That’s Vera alongside her father who helped that day and the little boy is my brother-in-law, Bev. Funny thing with Bev too – his wife has the same name as me. Often causes confusion!