Apologies for not posting last month. The due date was the day we returned from our 2nd holiday in 6 months curtesy of the generous retirement gift to my husband from his boss. Returning home late and tired to a cold house and empty fridge, and a mountain of washing to deal with I wasn’t up to writing. But here I am back again.

Our 10 days in the sun were perfect although on the day of our arrival we didn’t think so. Our flight delayed thanks to air traffic workers on strike in France and when we did land, we had to wait on our coach for other delayed passengers. It took longer getting from the airport to the hotel than the flight itself before we eventually arrived, the last drop on the run and only 10 miles from the airport! Our mood plummeted even further as the weather was awful, a howling gale, and never in 20+ years of visiting the Mediterranean had I seen it so grey, so angry with huge choppy waves. Great if you were into surfing, which some were doing. We really thought we had made a big mistake in choosing this place and time of year.

We’d upgraded to a superior room, which turned out to be the penthouse room over-looking the beach and affording a full view of the 8km bay close to the harbour. It wasn’t a large room, but spotlessly clean, well decorated, with a wide balcony, a floor-to-ceiling window at the side, lovely marble bathroom, and joy-of-joys a walk-in shower. Plus we had full coffee facilities, fridge, safe and all the extras one normally has to pay extra for.

The bay looking left from the balcony

We went down for an early evening meal then back up to our room for coffee and an early night as I hadn’t slept all night and we’d been up since 4 am for the airport taxi so we were well tired. We hadn’t been back in the room some 5 mins before a knock at the door, where stood 2 staff members, one holding 2 glasses, the other a bottle of champagne. It took a few minutes of working out their Spanish and them our English to understand this was compliments of the management for Dave’s birthday. We invited them in whereupon they burst into singing “Happy Birthday” in Spanish to him. He shot me an angry look, thinking I’d arranged this. I hadn’t. I know he hates fuss and we had purposely kept it quiet that we were travelling on his 71st birthday. Apparently, the manager on reception when we checked in noticed the significant date on his passport. Dave doesn’t drink wine so we bought it back with us to open at my mum’s 94th birthday bash at the end of this month. 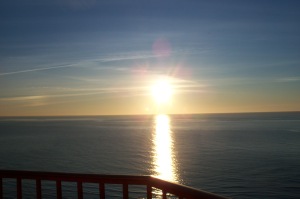 A glorious sunrise every morning

Dawn arrived  We woke to the sun rising directly in front of us, the sky blue, birds singing, as it did every morning thereafter. Our mood lifted. The weather the next 10 days was glorious, some days reaching 30 degrees,  not bad for February.  Heaven!

Dave isn’t into sightseeing or daytrips and as I knew the area very well, having done all the touristy things over the years, our days fell into a lovely relaxed pattern. After breakfast, he would go for a stroll along the edge of the surf the length of the bay whilst I relaxed on the balcony in the sun losing myself in a book. On his return, we’d have coffee then go for a walk along the promenade or exploring the town. Each day it was come out of the hotel doors then turn left one day, right the next. At either end of the bay we found a lovely place to stop for a drink and or snack: an English bar come restaurant at one end and a newly opened Spanish bar the other, the owners of which spoilt us with extra coffees, gratis brandies, chocolate and nibbles each visit.

This part of the coast is known for its sand sculptures, of which this was the best we saw. The detail was incredible, including a mouse after the cheese on the table, a cat, pigs and piglets in the corner, and a real fire in the hearth.

There was one downside to our location. The noise! The road between the hotel and beach was constantly busy, day and night, the Spanish loving the sound of car horns. Although we were 10 floors up, the sound of chairs scraping in the bars outside was also irritating as they shut shop at midnight. At 4 am, motorbikes and cars as the fishermen made their way to the harbour, then the boats start up and chug out. But the worse was the rubbish lorries. Where we were in Spain, instead of large communal bins at the roadside, here were large tanks set underground beneath small bins in which people dispose of their waste. At 5:30 am along would come a huge truck and crane to lift and empty the tanks. Each day a different tank: Monday, cardboard, Tues, plastic (you get the idea) until it was glass day, twice a week. Dreadful. Imagine a giant skip full of bottles from the residents and all the nearby bars being lifted, tipped and emptied into a noisy lorry, only to stop a little way further along and repeat. We are used to quiet all day and silence all night at home, so this took some getting used to.

Apart from the early morning disturbances, made up for by the sun appearing in front us every morning whilst we sat in bed drinking coffee watching, we didn’t want to come home, particularly as Storm David was raging in the UK. Our flight was delayed again, this time to the airport being fogbound. Eventually, we landed back in Bristol, a rather bumpy, uncomfortable landing but we were home.

We’d so enjoyed our holiday. In fact, that much so, Dave started looking and planning our next trip the following day. Sadly, like the rest of the world at the moment, everything has been put on hold. We are now waiting for the sun and summer to return to the UK as we hole ourselves up and pray we stay safe away from this awful virus.

Wherever you are, stay safe too.

I suspect the majority of us have lots of photos capturing special moments from our lives, from holidays to weddings and birthdays, gardens and those magical, often funny times. I too have loads but my biggest treasure is my Memory Box. No, not my brain, but a storebox full of those other mementos and keepsakes. In here is a collection of my life, the good and the bad. I was rifling through this yesterday in search of an item particularly pertinent to today, the third of September.

From the hospital record of my pregnancy to the order of service for my grandmother’s funeral plus sadly, many other relatives and dear friends who are no longer with us. The majority are reminders of much happier times.

A serviette and silver cake decoration from my sister’s wedding. Cards and gift tags and luck horseshoe from mine. Special cards, leaving cards, get well cards, Xmas cards; a letter of commendation from the police; letters from my mother (we used to exchange letters to keep in touch years ago because I never had a telephone), postcards, travel guides, theatre tickets and programmes, press cuttings, a video of the quiz show I took part in on television. The cork from a bottle of champagne enjoyed on my honeymoon and an envelope of first day cover stamps from Australia filled with other stamps from around the world. My daughter’s last school report, a Christmas folder she made at school. Wedding invitations. Thank you letters and cards.

So many things to ponder over and recall fondly and wonder where all the years have gone. In sorting through the box I quickly came to realise I need another box just for the kept special birthday and Christmas cards alone. One birthday card is extra-special – one that means the whole world and a rarity – one from my husband (he doesn’t do birthday cards so this was indeed so full of meaning and love!).

And there I was four hours later, still looking at all these things, opening folded letters from friends not read for a long time, the change of address notes. A complete set of decimal coins I won in a competition, and of set pre-decimal coins all dated the year I was born.  Finally, at the bottom of the box, I found what I was looking for: several ringlets of my daughter’s hair from the first time she had it cut. She must have been 4 years old. Her beautiful mane that would curl up into soft ringlets when it was washed, I loved to twine it in my fingers. Sadly, after that first cut it went straight, and has remained so ever since. Such a shame.

But why were the ringlets pertinent to today. Well, today is my daughter’s 46th birthday. It seems like only yesterday when she arrived in this world, a tiny copper-haired bundle of life the relied on me totally for her survival. She and I have come a long way since that day. There’s been good times, dark times and funny times and, with good fortune and care, there will be lots more birthdays to come. Happy Birthday, Katie.

And time to pack the Memory Box away for the moment.

I definitely need a larger box.

In the USA, today is President’s Day. Back when I was a kid, the birthdays of George Washington and Abraham Lincoln were each separate holidays. When Martin Luther King, Jr. day was declared a holiday, the powers that be combined the two presidents birthdays into one holiday called President’s Day. Sadly, our county government doesn’t celebrate this holiday. The Federal system does but not the local government. I’m curious as to whether other local governments close for this day. It chaps my hide that ours does not. I’m not trying to be controversial and I appreciate all that MLK, Jr. did but why is his holiday celebrated and the birthdays of two of our most important presidents aren’t? I mean, really, George helped found this country and Abe saved this country. What’s wrong with this picture?

Anyway, I close my office for this holiday and I give all three men the respect they are due. I will go back to work tomorrow to a lot of phone calls from people who will want to know where we were and I will proudly tell them. I plan to lift a glass of something in a toast to these two presidents.