We have been home for a month now and life is settling back into normal routine.  The 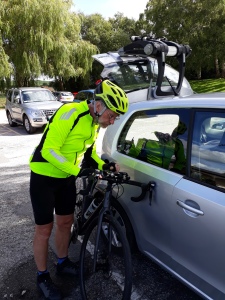 Big Trip has taken a back seat but also feels surreal.  For a few nights afterwards I was still driving north in my mind!  Now I am trying to remember the highlights and forget the lows.  I will do my best to make the remainder of the trip enjoyable for you too.

I left you with the alpacas saying hello! The receptionist at the Premier Inn, Denise, was one of several people who will stay in our minds.  Once we had settled in our room she insisted on doing some washing for both of us which was a great help, as normally we rinsed Peter’s kit in the bath then dried it in the back of the Skoda as I drove, or on dashboard at times! 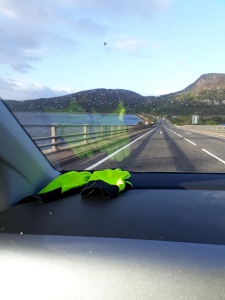 We came back from dinner to find his kit hung up in a drying room and my clothes ironed and folded.  Denise just wanted to be helpful and support us in our task.  One of several Premier Inn employees to show support and encouragement.  We set off after following our usual routine of breakfast planning meeting then Peter heading off ahead of me.  Each day I waited an hour or so before setting out myself in order to pass him en route for checks, a thumbs up indicated no problems. We were heading to Preston, again much of journey was on reasonable roads through beautiful countryside.  I was settling into a groove and enjoying being alone with my thoughts, but concentrating on the road!  Preston is a large city with complicated road structures.  I was apprehensive about Peter weaving his way through four lanes of traffic (not motorway) but scary.  He arrived safely and the only mishap was small shower that overflowed!  Not through the ceiling thankfully.

Preston Premier Inn was another highlight with wonderful staff.  Dave the receptionist displayed the famous northern wit that is so refreshing.  In the morning after I said goodbye to Peter Dave picked up that I felt “emotional” and offered me “a brew” – a cup of tea, after informing me that he had watched Peter set off on the CCTV and admired his high visibility outfit! The waitresses Therese and Steph insisted on giving me their £5 tip (hard earned) for our charity.  I was sent on my way overwhelmed by their generosity of spirit and caring.  Next stage was the height of scenery in many ways, Westmoreland – we stayed in Appleby which still hosts a traditional horse fair every year.  The scenery was more rugged and buildings stark but again the people were so friendly.

Peter and I met in an old market town called Kirkby Lonsdale which still has a market cross and is steeped in history.  Sadly space restricts much of what I would like to share but I hope you are getting a feel of the variety of areas we passed through.  A bowl of warm soup and homemade bread at a local hostelry helped us on our way.  As I drove through the dales I reached the summit of a hill and was surrounded by the peaks and dales covered with heather.  I thought of taking some photos but as the sun hit the cliff faces I was just stunned.  Nothing could capture their beauty adequately.  I think it might be the nearest I get to heaven.  Weary travellers, Peter from extreme physical effort: me from emotional stress, arrived at our welcoming overnight stop.  We ate Lamb Henry, named I thought after the chef who cooked it, but it was pointed out to me later it was probably named after the lamb!  Apologies to any vegetarians but it did taste delicious.

Next day we crossed the border into Scotland and on to Dumfries.  We were concerned as this was Saturday 15th September,  weather reports were forecasting the hurricane from East Coast of USA would be hitting Scotland on Monday. (I do hope none of you were affected).  Peter was concerned he would have to take a day off and was worried he would not pick up the momentum to restart especially with the bulk of the journey through Scotland ahead of us. Peter decided to sleep before making a decision and see what the weather would be like the following morning. We were lucky the weather next day was reasonable so we continued up to Kilmarnoch with wonderful views along the West Coast.  BUT Sunday 16th September Day 8 was the worst day of the trip. We planned a stop that day but events overtook us.

I made my way to a place called Cumnock to check it out, I had passed Peter about an hour previously, but it was the town was unsuitable.  I needed to rethink plans quickly.  Deciding to retrace my steps I passed Peter eventually on his way up a steep, long hill.  I had texted him earlier to warn him of a change of plan – we only rang in case of a real problem.  I turned around eventually and made my way up the hill, I saw him several hundred yards ahead just as he FELL into the road.  Luckily some guardian angel was watching over him.  I was the next car approaching him, at first I was concerned I had distracted him, but he had hit a patch of mud which made him lose control of the bike.  You can imagine how I felt seeing him on the road.  I pulled up metres from him with my hazard lights flashing and we managed to get him upright.  Peter was stunned but other than some scratches, bruises and a cut finger was fine – as was the Bike! A huge 4×4 had witnessed the events and pulled up behind my car, put his hazards on and ensured other vehicles pulled out around him and me.  This gentleman waited until he was sure all was safe and well, tooted his horn and drove off with a wave. Another special moment reminding me of the kindness of most people.

I will end now and complete the story next month, I hope you don’t mind.  This event remains vivid especially the “What ifs …” but despite this event Peter pushed on and finished.  I’ve mentioned how I was amazed by Peter’s strength of spirit but wow!

This entry was posted in Sports, Uncategorized and tagged Determination, People, Scotland. Bookmark the permalink.