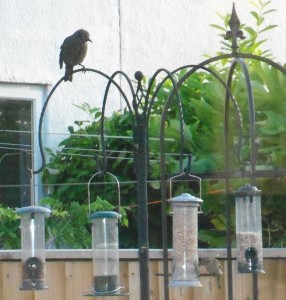 Meet Billy One Mate. He (I say “he” but it could well be a “she”) is a young starling that thinks he’s a sparrow.

I first became aware of him few weeks ago when the local starling flock of descended into my garden with all their noisy fledglings to feast on the birdseed dropped by the sparrows. The fledglings were able to fly reasonable well and most could feed themselves but preferred like most youngsters to let mum (or dad) feed them. I noticed Billy approaching one adult bird, begging for food. The adult kicked him away. Hmm, I thought, obviously wrong mum. He begged from another. She too kicked him on the head rather aggressively. This treatment was metered out by every adult Billy went too. He’d been pushed , almost trodden on, kicked and clawed away. I’d never seen birds do this to young ones before.  You couldn’t help but feel sorry for him. And when the flock finally flew off, Billy was left on his own. It was obvious he’d been orphaned.

For the next few days Billy No Mates as I christened him was in the garden on his own, sleeping in the holly tree by the fence and during the day sitting on the fence in the shade. I swear every time the starlings flew over he watched them with a forlorn look on his little face. He looked so sad. He spent a lot of time watching the sparrows darting to and fro from the bird feeder. He tried to feed from it too but was unable to get the hang of clinging to the perches. All he could do was follow the lead of the adult sparrows feeding their young on the ground with the dropped seeds or chipped nuts in the bird food. He begged from the sparrows to no avail. so found what he could on the ground.

I happened to look out of my bedroom window one morning to see him flapping about in the koi pond, trying to get out. Not a good place to take a bath and Dave had to rescue him. Billy toddled off into the undergrowth to dry out, no doubt feeling very miserable and sorry for himself. The following day he sat on the fence watching the sparrows bathing in the bird bath. Ahh, that’s where I bath, he must of thought, and joined them. The sparrows accepted him, ignored him really as he splashed and drank and shook and washed.

From then on, he flew with the sparrows. Whenever they came into the garden, you could guarantee Billy was coming up the rear. He’d seemed to have latched on to one sparrow in particular and wherever that sparrow went in the garden, Billy followed, be it among the flowerbeds to hunt for mealworms, up onto the feeder, not that he could feed from it, or into the bird bath. From then on he was known as Billy One Mate. It seemed the two couldn’t be separated. Over the course of the next few weeks, he became braver and bolder, seeing off other young starlings that landed too close to “his” food or his little friend. One morning he even squared up to a female blackbird but soon learned there is a pecking order and blackbird always wins over starling.

As the days have progressed he’s never far behind his little sparrow friend, but more and more now he’s flying with several other young starlings. I’d like to think in a few weeks’ time instead of having just one little playmate, he’ll be accepted into the starling flock and have lots of big friends to keep an eye out for him.

Good luck, Billy. You deserve to do well.

12 responses to “Billy One Mate”