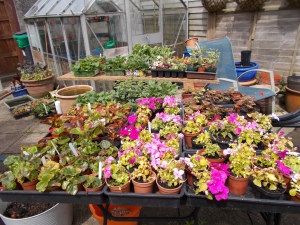 So, June already! And to think it’s only another three weeks before the nights start getting longer again. What a thought. What a horrible thought. It’s been a busy month and yet nothing much has been going on apart from gardening here. We had lots of pots and bedding plants and veg to put out. Thankfully, that’s all done and the gardens are filling out nicely. Although the weather has been good, I’ve not been able to spend many early mornings after dawn outside enjoying my coffee to the sound of the birds and bees. Mornings have been on the chilly side, although today, it was glorious out there, and so was I. 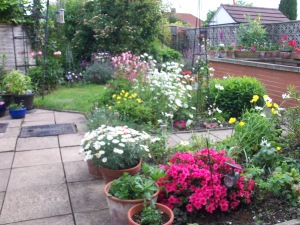 Dave went back to work a fortnight ago, following being home for 7 weeks recovering from his surgery, which means the house is strangely quiet. In fact, I miss him not being here. Still not for long. He’ll retire at Christmas, he told me that first morning he went out the door. Ha ha! Knew that wouldn’t last because he’s so totally enjoyed himself being home pottering in the garden etc and we did have lovely dry weather for those weeks. He came home yesterday announcing he’s handed in his notice and will be retiring at the end of this month! And so he should, considering he’s only a few months short of his 70th birthday. Mind you, how long it will last before he’s bored and looks for a part-time job, time will tell.

And what else… ah yes, … I’ve joined an art group. I’ve been wanting to for some time but being the shy, nervous sort I’ve put it off. The one I’ve been considering had a recent exhibition of their work so I toodled along to suss them out, see what sort of art they produced and if they were taking new members. I was impressed with the work on show and the people I met and so took the plunge. After a 2-week trial, we decided we liked each other and last night I signed up for the year. There’s no tutor, people paint whatever they choose, in whatever medium and simply enjoy the company, the banter, help and advice. Having produced a reasonably good little piece during this trial period (bluebells, of course!) the group leader kindly offered for me to hang several pieces in the room as they like to have work on display as other groups, such as flower arrangers/flower shows, WI meetings, knitting group, and others meet in the venue, and sales are often made this way. The group has regular exhibitions and shows themselves open to the public so it’s just a matter now of deciding which to frame and show. 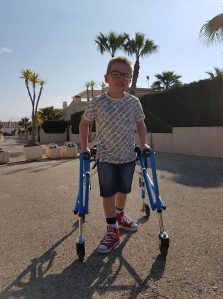 Before I go, I thought it time to give an update on our now not so little George. It’s been two years since he underwent major surgery to correct his misaligned hips etc. It’s been a hard time for him but he’s persevered despite hating constant physio and the discomfort he suffers. Often he simply refused to do his exercises. He’s walking well with aids, his spine is good and straight, but basically his left leg is still not completely fused 2 years post op. So there are 2 options: do nothing, or put the lad through further surgery in the hope the gap in his bone fuses. On a positive note, at least he is not in any pain or discomfort!  His parents have also taken him out of the ordinary state school as he was definitely missing out, nor could the staff give him the time or attention he needed. It was certainly holding him back. He’s now in a special needs school and thriving. He even went away for a week on a school trip without his parents. They worried all week – he loved every moment. His speech has greatly improved, in fact I gather he rarely stops talking! Mind you, he’s just as cheeky and mischievous as he’s always been, like any 10-year-old. That’s what we love about him. Always laughing, always cheerful. And despite all his problems, they are a wonderful, lovely family enjoying life as best they can.