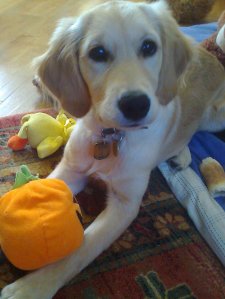 It’s hard to believe but Ms. Vivvy will be three years old next week! Wowee, where has the time gone? We adopted her just under two years’ ago and she’s been an absolute joy…and in unexpected ways. She’s not only gorgeous, well-behaved (mostly) and adaptable, but she’s so friendly and cheeky that she’s got quite the reputation here in the village where we live. We’ve lived here over twenty years now and until we started puppy-walking for guide dogs we only really knew a handful of people. That wasn’t helped by the fact we were both working during the day, too. Walking Vivvy has changed all that and now we have made so many lovely new friends and we really enjoy exploring the gorgeous countryside surrounding us. 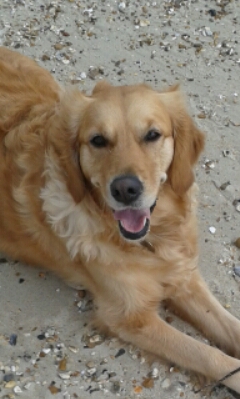 Because Vivvy has loads of doggy friends in the village I wanted to throw a ‘four-paws-party’ next weekend to celebrate her birthday and invite her chums along for fun and games in the garden. AJ thinks I’ve taken leave of my senses 🙂 While considering logistics I think he might be right. One of Vivvy’s BFFs is a sensitive little girl who gets stressed about the vagaries of the outside world, and her mum is currently trying to get her to come into our garden so that the girls can play while we enjoy a coffee, but until that happens I can’t consider a party without Vivvy’s special pal in attendance. Then there are a couple of dogs who don’t like each other, one who is very possessive over balls, another who barks incessantly when he gets excited…all in all, maybe a party is a trifle ambitious.

So, I’ll be making a special liver cake (yuk!) for our birthday girl (with candles of course) and she’ll have a special outing to the seaside  (her most favourite place on earth) and extra special hugs from us.